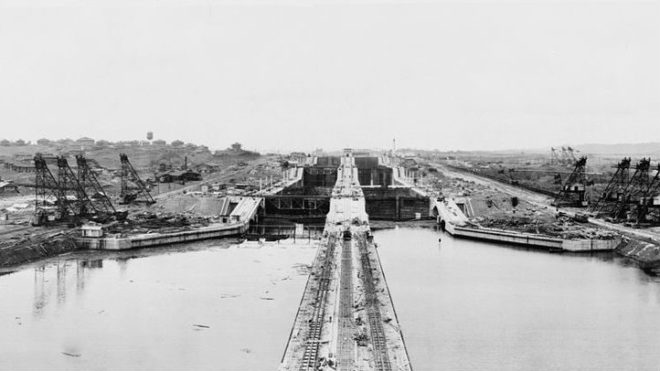 Construction of the Panama Canal, 1913. 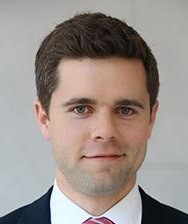 President Trump’s exchange with President Juan Carlos Varela of Panama sparked a social media maelstrom last week. “The Panama Canal is doing quite well. I think we did a good job building it, right?” Trump remarked during a meeting at the White House. “One hundred years ago,” Varela replied. The Internet lit up, and even Late Night show host Seth Myers piled on. But lost in the buzz, which mostly reiterated Varela’s point without his diplomacy, is the larger history of the Panama Canal and its relevance for today.

Understandably, Varela was not gushing with gratitude for the United States’ help. The mega project began with coercion, was built at tremendous human and economic cost and for decades operated with little benefit to locals. In many ways, Panama’s experience in the last century underscores the risks for developing countries of pursuing mega projects with this century’s rising power: China.

Teddy Roosevelt did more than drive a hard bargain for the canal. As Noel Maurer and Carlos Yu recount in their book, The Big Ditch, U.S. negotiators threatened to take their proposal for a canal to Nicaragua, and during the talks, U.S. Marines were stationed in the area.

At the time, Panama was part of Colombia. When Colombia’s senate would not agree to the terms of a deal, Roosevelt backed a Panamanian independence leader and sent the U.S. Navy to dissuade Colombia from intervening. As Roosevelt later recounted, “I took the Isthmus, started the canal and then left Congress not to debate the canal but to debate me.”

Construction came at a high cost. According to official records, more than 5,600 workers died during the U.S.-led construction. Black workers, including many West Indians, suffered disproportionately and, by some estimates, were nearly four times more likely to die than white workers. These losses were in addition to those from an earlier French-led construction period, during which an estimated 22,000 canal workers perished.

At the time, the Panama Canal was the most expensive public project in U.S. history. It was delivered a decade late and at twice its estimated cost, worse than the Washington Metro and the Bay Area Rapid Transit System, among other projects. To be fair, as Mauer explains, the canal’s cost overrun is proportionally better than those of the Miami Metrorail, Boston’s Big Dig and the Brooklyn-Queens Expressway.

Despite considerable cost overruns, the investment still paid off. The canal supercharged trade between the United States’ coasts, particularly benefiting the lumber industry in the Northwest and California’s oil industry. Mauer estimates that by 1940, U.S. gross domestic product was roughly four percent higher than it would have been without the canal. Eventually, costs for rail and road transport within the United States declined and so did the importance of the canal for Americans.

But Panama itself captured relatively little of this largess until it assumed ownership of the canal at the end of the twentieth century. Most of the labor used to construct the canal was foreign. Tolls from the canal were sent to the U.S. Treasury. A commissary was set up that carried U.S. goods and effectively undercut competition from local Panamanian merchants. Taking these factors into account, Maurer and Yu’s research suggests that Panama’s biggest benefit was indirect and unexpected: reducing malaria and yellow fever.

Today, Panama’s experience should serve as a cautionary tale for developing countries considering mega projects. According to the Asian Development Bank, developing Asia alone needs to spend $26 trillion on infrastructure by 2030 to maintain growth, eradicate poverty and address climate change. Seeing an opening, China has put forward an effort called the Belt and Road initiative that promises more than $1 trillion in infrastructure spending.

With great needs and great promises come great risks. Much has changed since Roosevelt set his eyes on Panama. But there is no doubt that negotiations over large infrastructure projects are still influenced by disparities. Power still matters, and smaller states remain vulnerable to coercion at the bargaining table. Poor deals can have consequences even a century after they are inked.

Three risks loom particularly large. Financial risks are considerable, especially when small economies take on massive projects. Laos, for example, has embarked on a railway project worth more than half of its gross domestic product with China’s backing. Pakistan has pegged its future to a $60 billion-plus package of energy and transport projects called the China-Pakistan Economic Corridor. It is far too early to tell whether these projects will succeed. But already they have become “too big to fail.”

Management risks are often overlooked. Like Panama at the beginning of the last century, some developing countries lack the capacity to operate major infrastructure projects effectively. Modern ports, for example, use cutting-edge technology and require well-trained work forces to compete globally. Ribbon-cutting ceremonies win headlines, but success ultimately depends on the ability of countries to operate and maintain projects. As any Amtrak rider can attest, deferred maintenance leads to more disruptions and bigger costs.

There are also security risks. Many transportation projects have military uses, and their construction can justify the presence of military forces, often to protect foreign workers. For example, experts have questioned the economic merits of Chinese port investments in Pakistan, Malaysia, and elsewhere. This should give prospective hosts pause. If deals are difficult to negotiate fairly with a large partner, they probably will not be easier to revisit when that partner has military forces stationed there and controls a critical economic hub or connection.

To be sure, China’s investment in economically viable projects should be celebrated, especially when deals are done transparently and meet international environmental and social standards. Nor are other developing countries mere pawns, caught helplessly between larger powers. For many countries in Southeast Asia, for example, the infrastructure rivalry between China and Japan has provided leverage for reaching better deals. As Indonesia’s finance minister put it recently, “This is a good competition.”

Trump was right that the Panama Canal “is doing quite well.” For almost two decades, Panama has surpassed expectations and overcome concerns that it lacked the capacity to operate the canal effectively. The canal is even more profitable under Panamanian leadership, which has put the private sector in the driver’s seat, than it was under U.S. control. But Panama’s arduous, century-long path to that success is not one that developing countries should aspire to follow.

Jonathan E. Hillman is director of the Reconnecting Asia Project at the Center for Strategic and International Studies in Washington, D.C.

The opinions expressed herein are the author’s and not necessarily those of The Maritime Executive.