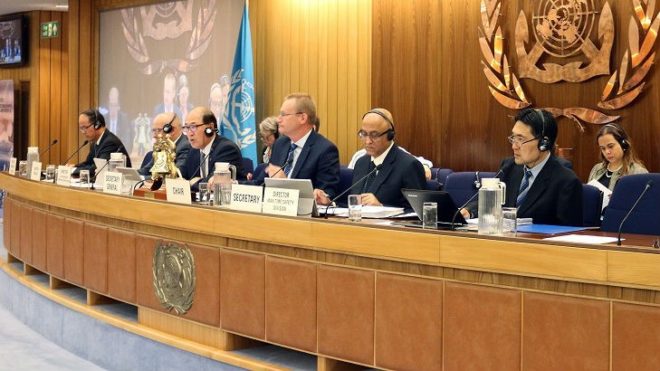 IMO’s Marine Safety Committee (MSC 98) has adopted amendments to SOLAS 2020 that raise the damage stability requirements for passenger vessels in the event of flooding caused by a collision.

The amendments raise the ‘required index R’, the damage stability requirement representing the ship’s capability to remain stable and afloat in the event of flooding after a collision. The requirement is based on a probabilistic damage stability methodology for passenger ships that was developed in the partially E.U. funded research project HARDER and mandated in SOLAS 2009.

Since 1995, new IMO regulations must pass a formal safety assessment before adoption. This risk-based approach ensures that new regulations are transparent, fact-based and raise safety cost-effectively. In the partially E.U. funded research project SAFEDOR, formal safety assessments were developed for several ship types and submitted to IMO. The results indicated that damage stability requirements could be raised cost-effectively for both RoPax and cruise ships.

Rolf Skjong, Chief Scientist at DNV GL – Maritime, says: “The adoption of the new requirements marks the implementation of 20 years of research from many stakeholders working cooperatively to make our industry safer.”

The MSC meeting, running from June 7 until June 16 and is expected to adopt the following amendments:

• Draft amendments to SOLAS regulation II-2/9.4.1.3 to clarify the requirements for fire integrity of windows on passenger ships carrying not more than 36 passengers and on special purpose ships with more than 60 (but no more than 240) persons on board.

• The next set of draft amendments (04-17) to the International Maritime Solid Bulk Cargoes Code (IMSBC Code), to update requirements for a number of cargoes. The draft amendments also include those relating to paragraphs 4.5.1 and 4.5.2, highlighting the responsibility of the shipper for ensuring that a test to determine the transportable moisture limit (TML) of a solid bulk cargo is conducted. Also included are draft amendments related to substances which are harmful to marine environment, to require the shipper to declare whether or not a solid bulk cargo, other than grain, is harmful to the marine environment.

• Draft amendments to the 1994 and 2000 High-Speed Craft (HSC) Codes, to exempt certain smaller vessels from the requirement to carry a rescue boat, provided minimum requirements for carrying survival craft are met and provided a person can be rescued from the water in a horizontal or near horizontal body position.

• Draft amendments to the Code for the Construction and Equipment of Mobile Offshore Drilling Units, 2009 (2009 MODU Code) to update and amend the 2009 MODU Code, taking into account recommendations arising from the investigation into the explosion, fire and sinking of the Deepwater Horizon in the Gulf of Mexico, in April 2010. Key revisions concern machinery and electrical installations in hazardous areas, fire safety, and life-saving appliances and equipment.

The MSC is expected to adopt a number of new and amended ships’ routeing measures. They include the establishment of a new area to be avoided (ABTA) as an associated protective measure for the “Tubbataha Reefs Natural Park Particularly Sensitive Sea Area (PSSA) in the Sulu Sea” (the Philippines). The ABTA is linked to the proposed PSSA, which was approved in principle in 2016 and is expected to be formally designated by IMO’s Marine Environment Protection Committee (MEPC 71) in July.

The MSC is expected to adopt or approve a number of new and revised performance standards and guidelines related to operational safety, including those to implement the e-navigation strategy. These include draft amendments to the revised ruidelines and criteria for ship reporting systems (resolution MSC.43(64)), addressing mandatory ship reporting systems established in accordance with SOLAS regulation V/11. The revisions update the resolution and encourage the use and recognition of automated electronic means of ship reporting.

The MSC is expected to consider revisions to the Guidelines for Verification of Conformity with Goal-Based Ship Construction Standards, based on the experience gained during the initial verification audits.

The MSC will be invited to consider proposals for the Committee to undertake a regulatory scoping exercise to determine how the safe, secure and environmentally sound operation of Maritime Autonomous Surface Ships (MASS) may be introduced in IMO instruments.

The MSC is expected to approve the draft Modernization Plan of the Global Maritime Distress and Safety System (GMDSS), prepared by the Sub-Committee on Navigation, Communications and Search and Rescue (NCSR). The plan envisages the development of amendments to SOLAS and related instruments for approval in 2021 and their adoption in 2022, with entry into force in 2024.

Approval of guidance and guidelines

The MSC is expected to:

• Approve draft guidelines on safety during abandon ship drills using lifeboats and draft amendments to update the Guidelines for developing operation and maintenance manuals for lifeboat systems (MSC.1/Circ.1205). Both sets of guidelines have been reviewed following the adoption at MSC 96 of the requirements for maintenance, thorough examination, operational testing, overhaul and repair of lifeboats and rescue boats, launching appliances and release gear (resolution MSC.402(96)) and the related SOLAS amendments which make them mandatory. The package of requirements, expected to enter into force on January 1, 2020, aim to prevent accidents with survival craft and addresses longstanding issues such as the need for a uniform, safe and documented standard related to the servicing of these appliances, as well as the authorization, qualification and certification requirements to ensure that a reliable service is provided.

• Approve draft escape route signs and equipment location markings, together with the associated draft Assembly resolution, with a view to subsequent adoption by the IMO Assembly. The symbols reflect the international standard ISO 24409 2:2014.